Probe Plus In The Media 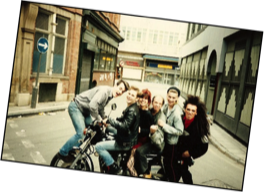 Dodging bailiffs, living hand-to-mouth, the ever-present threat of bankruptcy - it’s all part of the glamour of life in the music industry. Or at least it has been for Geoff Davies, the man behind Liverpool’s Probe Plus.

As an indie label it might not be up there with Stiff, Factory or Creation, but for the last 30 years Probe Plus has championed a succession of innovative and unusual bands, including the Dead Poppies, Marlowe and Half Man Half Biscuit (HMHB), and walked along that seldom travelled path that puts greater emphasis on what’s good rather than what just sells.

Anyone who has ever spent time in Liverpool will probably associate the name Probe with the iconic record shop; a den of obscure vinyl, intimidatingly knowledgeable staff and a miasma of weird and wonderful smells.

“I’d opened the shop ten years before the label started as the kind of shop that I’d want to go in,” says Geoff. “Loads of music from the margins, people that worked there who knew their stuff and a more relaxed attitude, like letting people come and listen to music before they bought it.”

From its location in the middle of town Probe became the centre of gravity in the city for anyone with even a passing interest in the musically alternative and weird, with its more regular visitors affectionately labelled ‘probies’. In the early 1980s, along with nearby Eric’s, the legendary Liverpool club, it was at the heart of a burgeoning scene that saw acts like Echo & the Bunnymen, The Teardrop Explodes and Pete Wylie’s various incarnations of Wah! eventually launch themselves on an unsuspecting world.

“The label kind of grew from the shop,” continues Geoff. “Probe was such an integral part of the local scene that I was constantly coming into contact with bands, even employing people like Pete Wylie and Pete Burns in the shop for a time. It seemed natural for me to dip my toe into putting out music rather than just selling it. And so from a little room above the shop Probe Plus was born.” 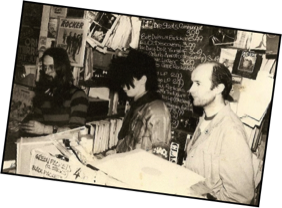 Ex Post Facto. This was followed in 1982 by two releases that illustrated the label’s capacity to comfortably stride disparate genres, a characteristic that would later come to define it. ‘Piggy in the Middle Eight’ by Kirkby band Cook Da’ Books, was a piece of light, white reggae, and ‘Toxteth’ by Public Disgrace, a high octane slab of hardcore punk.

These early years of the label were relatively low key, with releases being limited to a handful of singles and EPs.

“All that changed around 1984/85,” says Geoff. “A lot of my time had been taken up acting as a wholesaler with Rough Trade as part of the Cartel (an indie co-operative record distribution network). But I’d got into a bit of a financial mess with it all. Basically, I was distributing to other record shops in the North-West and people weren’t paying me what they owed. In the end I did a deal with Rough Trade that cleared the debt I’d accrued in exchange for my customer list. Suddenly, not only did I have the weight of the debt lifted off my shoulders but I had loads more time on my hands too, time that I invested in the label.”

It ended up being a good decision. The next few years marked something of a purple path for Probe Plus, with album releases by well regarded bands such as The Mel-o-Tones and Gone To Earth as well as the cementing of a long and fruitful relationship with John Peel, who would go on to request sessions from thirteen of the label’s bands. 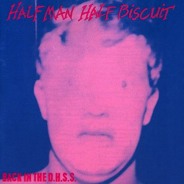 But Probe’s crowning glory during these years came in 1985 when two young lads called Nigel Blackwell and Neil Crossley dropped a demo tape into the shop.

“I remember listening to the band’s opening song, ‘God Gave Us Life’, in the car and hearing the line ‘God gave us life so that we could take sweets off strange men in big cars and get driven to the woods to stroke non-existent puppies’, and I thought that I had to sign Half Man Half Biscuit,” laughs Geoff.

And the rest, as they say, is history. The resultant debut album Back In The DHSS’ was the biggest selling indie album of 1986, spending weeks at the top of the indie charts. It marked the beginning of a relationship between the band and the label that lasts to this day. Its success also meant that Geoff was able to significantly increase the label’s output, with bands like the Walkingseeds, The Revolutionary Army of the Infant Jesus and Jegsy Dodd & the Sons of Harry Cross joining the Probe stable.

It was during this time that he also got more involved in the production side of things. “I really wanted the bands on the label to sound the same in the studio as they did live,” enthuses Geoff. “Before I got involved that wasn’t always happening. The problem in the mid-80s was the tendency to over-produce. It would turn great live bands into slick nothings. So I got together with a local lad called Sam Davis, who used to be in the seminal Liverpool band Deaf School.

He had a bit of experience in studios and so together we began trying to capture the essence of what these bands were like live.”

A lot of Probe’s releases from around this period and beyond certainly embrace a kind of low-fi rawness, one that adheres closely to the live experience. It’s something that a lot of indie music produced over the last few decades has gradually tried to shed.

As a sound it’s probably best exemplified by HMHB, a band that seem to revel in under-production, sounding in the studio almost as identically ramshackle as they do live.

Although the money from Back in the DHSS gave the opportunity to increase the label’s output, what it didn’t provide was guaranteed success.

“I’ve got albums and singles released back then that are only now just starting to break even” laments Geoff. “A lot of the bands on the label, like Calvin Party and St. Vitus Dance, got some critical acclaim but that never translated into massive sales. Aside from the Half Man stuff, I don’t think there’s much I’ve put out that’s actually made a profit.”

This might not have been so bad had HMHB singer Nigel Blackwell not decided to take a lengthy sabbatical from the music industry after the release of ‘Dickie Davis Eyes’ in 1986. 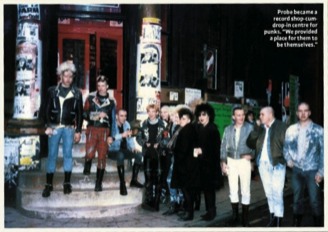 “I was ok for a bit but by the beginning of the nineties things eventually became pretty desperate. At one point I was dodging the bailiffs,” laughs Geoff.

By then he no longer owned the shop, having given it to his wife Annie after the couple had separated.

“I took the upstairs, which was the label and she took downstairs, which was the shop. It was all very amicable. The only problem for me was that the label never really made much money,” he continues. “I only ever put out what I liked, not what I thought would easily sell. There were times I could have released what I call ‘convenience records’ but I just didn’t want to do it. It might not have made much commercial sense but I’d got into this to work with music I loved and not just to make money.”

Despite advice from those around him to wind the label up, and the great temptation to do as they advised, he chose instead to carry on in the hope that things would turn around. That they did was attributable to one album, HMHB’s 1997 release, ‘Voyage to the Bottom of the Road’. Although the band had returned a few years earlier with ‘MacIntyre, Treadmore and Davitt’, Voyageseemed to reconnect them with an audience beyond their small band of die-hard fans.

“Their coming back had helped but once Voyage was released it made all the difference. The album got loads more airplay. Songs were featuring on Radio One shows other than Peel,” says Geoff excitedly. “Suddenly the band was a big deal again, and since that point I haven’t had to dodge the bailiffs once.” 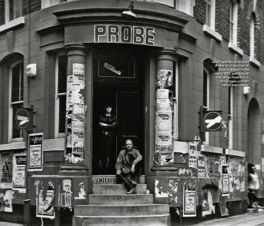 The resurgent popularity of HMHB has also meant that the label’s been able to increase its output again. This year alone five albums are being released, including one from the kind of band he swore he’d never go near again.

“In the past I’d lost money on young rock bands, bands that I thought were great but who just didn’t seem to make it. I’d hated disappointing them and didn’t really want to go through that again and yet here I am putting out an album by Lovecraft, another young rock band, with an average age of around twenty-five. I’m not entirely sure how that happened,” muses Geoff.

You would think that thirty years of failures, near misses and bouts of financial catastrophe would have dimmed his enthusiasm and yet the opposite seems to be true.

“I still love doing this. I had the choice years ago whether to get into music or carry on in my job at a local carpet showroom and maybe work my way up the company. I never regret the decision I made. There have been plenty of really bad times since, but it’s all been worth it to do what I’ve done. I think the key has been learning to live on very little, something I picked up during my travelling years in the sixties. I think that’s really important if you’re going to run a label as frustratingly erratic as mine.”